Dale Murphy was drafted in the first round of the 1974 Major League Baseball draft by the Atlanta Braves. He went on to have a long and successful career, winning back-to-back National League MVP Awards (youngest player in history to achieve this feat at that time), as well as five Gold Gloves, four Silver Sluggers, and numerous other awards and honors through the years.

He was a seven-time All-Star and still today is known as one of the most beloved athletes to ever play in Atlanta. Off the field, he is known for his integrity and his determination to play the game the right way. He was inducted into the Braves Hall of Fame in 2000. His number (3) was retired in 1994 and hangs today in SunTrust Park as a tribute to his celebrated career.

END_OF_DOCUMENT_TOKEN_TO_BE_REPLACED 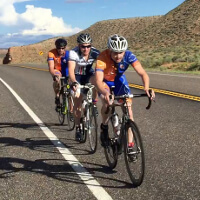 Bryan Byrge’s legacy continues. The father of four died in a tragic accident while riding his bike on March 12, 2014. The way he lived his life has inspired his friends to continue pushing to be their best. His motto was “Live Big,” and that is just what people are doing in his memory. A group of 12 Fishbowl employees and friends were inspired by the goal Byrge made a few years ago to complete the Utah Triple Crank Challenge, and they decided to complete it this year in his honor. END_OF_DOCUMENT_TOKEN_TO_BE_REPLACED 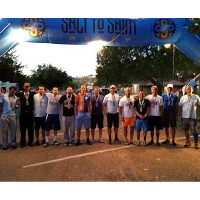 This past weekend, more than a dozen Fishbowl employees participated in a huge relay bike race that went all the way from Salt Lake City in northern Utah down to St. George at the southwest corner of Utah. The race is appropriately called the Salt to Saint Relay. Utah isn’t exactly known for its flat terrain, and this 425-mile race has a 20,000-foot increase in elevation. It takes a special kind of person to want to take on a challenge like that. END_OF_DOCUMENT_TOKEN_TO_BE_REPLACED
There was all sorts of buzz on the morning of Friday, December 7, 2012 about who the special guest would be at Fishbowl’s annual Christmas party. Some speculated it might be a famous business leader, others thought it would be the head of a university, and others (myself included) simply had no clue what to expect. All of our expectations were blown away, though, when out stepped former Brigham Young University football head coach LaVell Edwards onto the stage. END_OF_DOCUMENT_TOKEN_TO_BE_REPLACED
Brigham Young University’s men’s basketball team came back from a 25-point deficit to win their game against Iona College on March 13, 2012, marking the biggest comeback in NCAA tournament history. Was that luck or skill? END_OF_DOCUMENT_TOKEN_TO_BE_REPLACED
Book a Demo