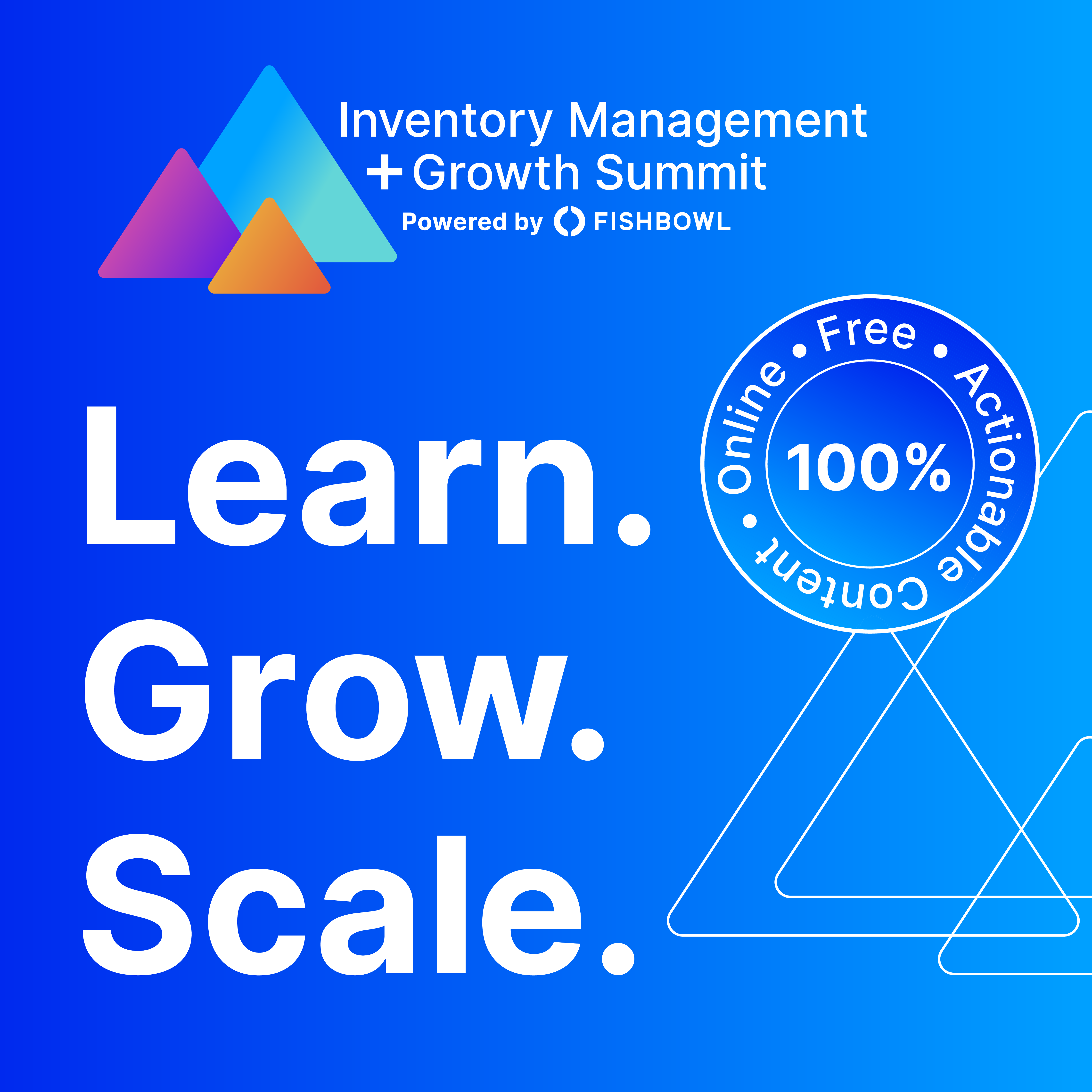 At the end of September 2021, Fishbowl hosted its first-ever Inventory Management + Growth Summit with numerous business experts. These include:

There’s something for everyone in this summit. We’ve put together summaries of their presentations in the following blog posts. Click any and all of them to check them out at your leisure.

END_OF_DOCUMENT_TOKEN_TO_BE_REPLACED

Vince DeAngelis is 34-year veteran of the shipping and mailing industry who joined Shippo in January 2021 as its Vice President of Global Carrier Partnerships.

Before that, he spent 10 years at Quadient where he managed all aspects of their carrier partnerships, as well as shipping product and program management and U.S. based R&D.

DeAngelis spent the first 20 years of his career working for the United States Postal Service. His roles at the USPS included Manager of Ad Mail Sales Development in Windsor, Connecticut, and Regional Director of the New York Sales Center before being named National Director of Sales and Business Development and Director of Brand Management, Value Added and Special Services, in Washington D.C.

END_OF_DOCUMENT_TOKEN_TO_BE_REPLACED

Felix Baca is Weave’s Director of Demand. He has worked with enterprise software companies, startups, and numerous ecommerce brands. He believes an introduction to a great brand, product, or piece of software has the potential to change a person’s life for the good.

With a proven track record of what it takes to be successful in the ever-evolving paid social channel, he is going to deliver insights into how to get your Facebook and Instagram marketing set up and running efficiently.

END_OF_DOCUMENT_TOKEN_TO_BE_REPLACED

Dawn Brolin is the President & CEO of Powerful Accounting. The accounting community has been suffering for the past 18 months, and small businesses have been feeling that same pain and relying on them to survive the pandemic. She decided to ensure her Connecticut firm would thrive during COVID-19 by putting the right technology in place.

END_OF_DOCUMENT_TOKEN_TO_BE_REPLACED

Fishbowl brought together four brilliant marketing minds to discuss a number of strategies and tactics that can benefit your business. The panelists are:

END_OF_DOCUMENT_TOKEN_TO_BE_REPLACED

Austin Anderson is the Vice President of Training and Support at Fishbowl.

Fishbowl has experienced a lot of innovative changes and growth over the last 4-5 years, and Anderson is excited to tell you about how they’ve happened.

Most of a Fishbowl customer’s lifecycle is spent with the Support team. They spend 45 days with the Sales team and 60-90 days with their Implementer. The rest of their time is with Fishbowl Support. It’s important to help them with their ongoing concerns and challenges to keep that relationship strong.

END_OF_DOCUMENT_TOKEN_TO_BE_REPLACED

John Choate is the Managing Director of SA-720TM Strategies, a consulting firm providing seminars on cross-functional teamwork and strategic planning based on principles derived from the U.S. Special Operations community and successfully employed in the corporate world.

He began his professional career as a naval officer in the SEAL teams. Following completion of training as the officer-in-charge of SEAL training class 218, he spent the next 12 years in both active and reserve billets deploying overseas in support of national security objectives.

END_OF_DOCUMENT_TOKEN_TO_BE_REPLACED

Andrew Smith is the Cofounder and Managing Director of the Savory Restaurant Fund, a Mercato Partners food-and-beverage-focused practice founded in 2018. Savory closed Fund I at $100M in October 2020 and a subsequent $100M Fund II in May 2021. Currently, Savory owns five beloved brands, including Mo’Bettahs, Swig, R&R BBQ, The Crack Shack, and Via 313. Savory operates 95 restaurants in five states and will add an additional 45 locations over the next 12 months.

Smith spent the last 23 years as an entrepreneur, cofounding three different technology companies from 1998-2008 and entering the restaurant industry in the middle of one of the greatest recessions. Since 2009, he has assisted in developing, acquiring, and operating 200+ restaurants across 11 states, generating more than $1.5 billion in sales.

END_OF_DOCUMENT_TOKEN_TO_BE_REPLACED

Matt Frisbie started his career at the Walt Disney Company in entertainment as a performer in high school and college, working his way into the Entertainment Art Department for seven years. With the skills and brand positioning he learned at Disney, he began a stint in independent film, working with development houses, such as The Juniper Sequence, Georgeville Entertainment, and Paramount CBS.

Once his production and storytelling skills developed, he joined forces with marketing creatives to start a brand-consulting firm called Art+War, which he ran for the next 10 years until going in house with his largest client, Little Giant Ladders in Springville, Utah.

Frisbie is the Chief Marketing Officer at Little Giant Ladders, tasked with taking the legacy ladder company to #1 in its industry. He’s built a large team of creatives and advertisers to change the industry and excite customers with unique products and innovative community-building strategies.

END_OF_DOCUMENT_TOKEN_TO_BE_REPLACED

Dale Murphy was drafted in the first round of the 1974 Major League Baseball draft by the Atlanta Braves. He went on to have a long and successful career, winning back-to-back National League MVP Awards (youngest player in history to achieve this feat at that time), as well as five Gold Gloves, four Silver Sluggers, and numerous other awards and honors through the years.

He was a seven-time All-Star and still today is known as one of the most beloved athletes to ever play in Atlanta. Off the field, he is known for his integrity and his determination to play the game the right way. He was inducted into the Braves Hall of Fame in 2000. His number (3) was retired in 1994 and hangs today in SunTrust Park as a tribute to his celebrated career.