Prince Michel Vineyard & Winery, one of Virginia’s oldest and largest wine producers, was established in 1982. The headquarters contains a manufacturing facility as well as a retail tasting room and gift shop. On average, roughly 300,000 bottles of wine are produced annually. The company was purchased by the present owners in mid-2005. After two years of frustration with the information being presented by QuickBooks, in late 2007 the owners brought in a new chief financial officer (CFO) to address the situation.

As of late 2007, the systems supporting the business were inadequate. A portion was directly attributable to QuickBooks’ weaknesses regarding multiple warehouses and bill of materials. These shortcomings were compounded by procedural problems. For example, all manufacturing inventories were expensed upon purchase, then looped back (via manufacturing charge-out) to cost of manufacture at a later date. This practice, in combination with a number of other workarounds and estimates, ultimately produced meaningful financial statements but only months after the year was over. Additionally, due to the nature of some of the workarounds, at times cost of goods was not assigned at the item level, hence margin reports contained inaccurate information. Overall, the major business challenges included:

The owner noted, “We were running blind from both the operational and financial perspectives. Not only was it frustrating to not know what our most profitable products were, it was embarrassing to run out of product or short-ship.” 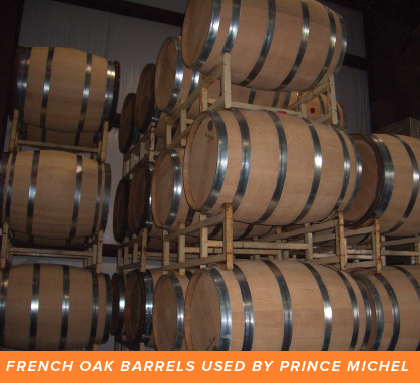 In early 2008 the new CFO issued a request for proposal to approximately 10 commercial software vendors, ultimately reviewing the capabilities of QuickBooks, Microsoft, and various industry-specific software providers. After a month of reviewing and seeking clarification on the responses, as well as viewing demonstrations of the offerings, it was tentatively determined that the right solution had not emerged. Shortly thereafter, Prince Michel became aware of Fishbowl, and after further evaluation determined the right solution would be QuickBooks linked to Fishbowl Manufacturing. After a fairly brief testing and training period, the conversion to Fishbowl was made in late June 2008.

The bills of materials are constructed with a combination of inventoried items (such as bulk wine, bottles, and corks) and standard over-heads (such as labor, additives, and depreciation), thereby determining cost to manufacture as soon as the work is complete. Additionally, the ability to have hierarchies of parts enables Prince Michel to do large lots of a given wine, and later apply special caps or labels for specific customers under different part numbers (this enables a reduction in inventory while avoiding crises). The ability to use multiple warehouses, both physical and logical, has been perfect for improving inventory accuracy. To top it all off, Fishbowl was implemented without hiring a consultant and with relatively little training. The videos were certainly of value, but credit also goes to the intuitive nature of the Fishbowl approach to processes.

In many ways, today Prince Michel is a different company. For example, pre-Fishbowl the winemaker maintained part inventory on spreadsheets and monitored finished goods inventory by “keeping an eye out” for large movement. Stockouts and delayed shipments were common. With Fishbowl, through the application of reorder points, as well as the allocation of pending sales to inventory calculations, a reorder report is generated weekly to guide production planning. Pre-Fishbowl, there were no reliable reports on product margins, and in some instances the margins by customer were unreliable as well. With Fishbowl, product and customer margin reports are reviewed routinely and with confidence. In brief form, Fishbowl was able to help Prince Michel:

One of the best stories is this: Late each year, Prince Michel meets with its four largest customers, always asking, “What can we do to serve you better?” At the time of those customer meetings in 2008, when the benefits of Fishbowl were just beginning to be realized, the common response to the serve you better question was, “Have reliable quantities on hand. We can swallow price increases a whole lot better than not having something to sell.” In the 2009 customer meetings, when asked specifically about inventory problems, the across the board comment was, “Inventory availability is no longer an issue.” Talk about a priceless response!

The owner stated, “Fishbowl played a key role in moving Prince Michel from crisis management to informed pricing, production planning, and sales fulfillment. From a systems and knowledge perspective we are so much better off than we were on QuickBooks alone.”